Redesigned from a blank page, while capitalizing on the qualities of its highly praised predecessor Big Thumb, the heavy-duty Quon hit the market in 2004 and became the company’s flagship vehicle. Quon integrated the most advanced technologies - some world-first innovations - in electronics, safety and the environment.

Although many around the world believed meeting the rigorous long-term emission regulations set to go into effect in Japan in 2005 was an impossible task, the company succeeded one year ahead of schedule, introducing a top-level urea selective catalytic reduction (SCR) system called FLENDS (Final Low Emission New Diesel System) in the exhaust gas after-treatment system. This marked a first in the industry and resulted in a substantial boost in environmental performance and fuel economy. Among its other distinguishing features, the GE13 engine mounted on Quon adopted a unit injector, with the top-end model realizing up to 520 horsepower.

The new cab design aimed to diminish fatigue on long hauls and improve driver use in other areas such as installing a front passenger seat that flips up, to allow drivers to stand up and get changed inside the cab. In terms of safety, Quon introduced a new structure that included a highly rigid cab construction and  the world’s first knee airbag, as well as new brake standards to reduce damage in the event of a collision. A number of IT-driven features such as a voice-assist function and an internet-based remote checking function transformed the heavy-duty truck into a smart vehicle for the next generation. 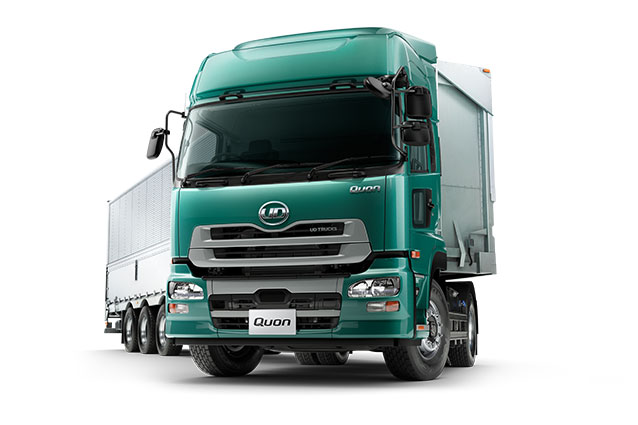 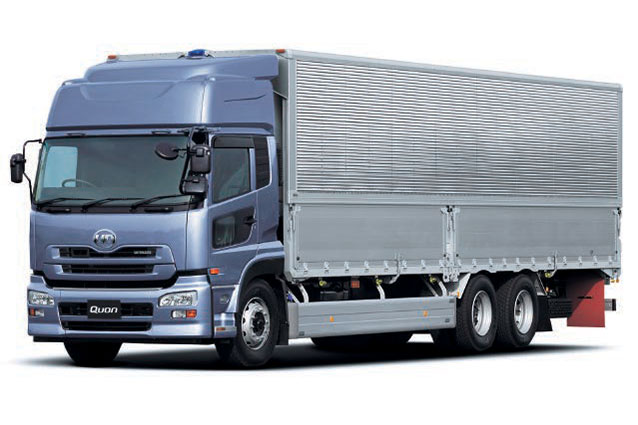 A new start at UD Trucks, a new step forward for Quon

After joining the Volvo Group in 2007, the company name was changed in 2010 to UD Trucks Corporation. Adopting UD Trucks as the unified brand name - the UD trademark had been a symbol of the company and its products since the 1950s - meant building on the strong UD heritage and consolidating its identity as a modern global truck brand with worldwide presence. Signifying the company’s strong determination to expand its truck business, this strategic move further advanced the platform for UD Trucks to develop and supply trucks befitting the new era through synergies with the unrivalled technologies of the Volvo Group.

Like the mid-duty Condor, Quon also benefitted considerably from the new joined forces, with the implementation of the highly performing and fuel efficient GH11 engines. One major innovation was the launch of the new version of UD’s world leading automatic gearbox, the famous ESCOT-V. Offering unequaled drivability and greater fuel economy, the 2-pedal robotized-clutch gearbox allows a more relaxing drive, a benefit for both  safety and driving pleasure.

The ESCOT-V – the star in a long and prestigious line of innovative predecessors  has earned its name as the most technologically advanced automatic gearbox in its segment. Mated to the highly praised GH11 engine, ESCOT-V combines state-of-the-art mechanical and  electronic technologies, to provide the driver with a  pleasant and responsive drive, and fleet managers with lower operating costs and better fuel efficiency

In 2014, ESCOT-V was upgraded with improved software and an Eco mode to maximize fuel efficiency, offering an acceleration limiter for gradual speed increase and a Soft Cruise Control function. It teamed up brilliantly with GH engines to offer unequaled drivability, low running costs and reliability. Constantly looking ahead, Quon launched in 2014, received a new major overhaul, with a range of improvements leading to even better drivability, higher payload and lower fuel consumption. 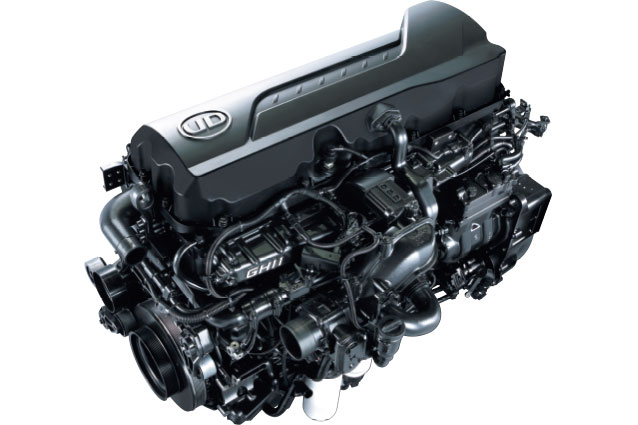